Columbus - Lou (D-Steubenville) and Nick Barborak (D-Lisbon) called on the to legislation to restore property tax relief to ’s citizens.

"Over the summer I spent time traveling throughout my district and listening to my constituents,” said Senator Gentile. “They were very clear— should restore the homestead exemption to middle income Ohioans who will be turning 65.”

“The new eligibility requirements make the threshold too low putting thousands of Ohioans who may be retired or living on fixed incomes in a bind. 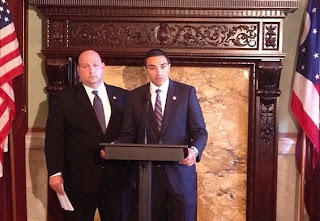 As the cost of living increases for Ohio’s s, the state should take into consideration the impact this will have on their quality of life,” Gentile said. It is estimated that at least 40,000 households will be affected by the new eligibility requirements. The budget established that those who are not yet 65 and who earn more than $30,000 would no longer qualify for the homestead exemption.

“Our bill would repeal the arbitrary threshold and provide much needed property tax relief to thousands of Ohio’s seniors,” Gentile stated. “I am urging my colleagues to give this legislation serious consideration and make Ohio’s seniors a top priority.”