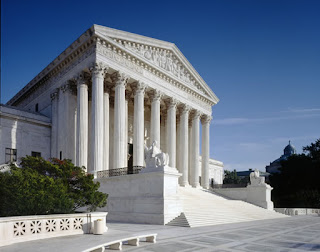 At issue were the federal Defense of Marriage Act (DOMA) and California’s Proposition 8.

DOMA defined the term marriage as "a legal union between one man and one woman as husband and wife" and spouse as "a person of the opposite sex who is a husband or a wife".

IN a 5-4 decision, the Court ruled that DOMA, enacted in 1996, violated the equal protection of the Constitution. Provisions of DOMA barred the federal government from extending hundreds of benefits to same-sex partners and spouses of federal employees.

In striking down Section 3 of DOMA, the Court opened the door for thousands of federal employees in same-sex relationships, to access federal benefits and protections accorded heterosexual couples.

Under DOMA, same-sex couples were denied access to federal benefits even if those couples were legally joined in states allowing same-sex marriage or so-called civil unions.

In the Prop 8 case, the Court ruled 5-4 the plaintiffs did not have standing to sue, effectively gutting the controversial proposition. Supporters of a ballot initiative Prop 8, which banned same-sex unions in California, filed suit after the state government refused to enforce the ballot initiative.

It is expected that Gov. Jerry Brown and the California Legislature will move swiftly to reinstate same-sex marriage.

Reaction to the Court’s decision was swift from both sides of the issues.

DOMA plaintiff Edith Windsor sued after being forced to pay over $300,000 in inheritance taxes after the death of her long-time spouse Thea Spyer. Windsor said her first reaction was to cry which gave way to a feeling to elation.

“Children born today will grow up in a world without DOMA and those same children who happen to be gay will be free to love and get married as Thea and I did but with the same federal protections, benefits and dignity as everyone else,” Windsor said.

The ruling will force the federal government to reimburse Windsor.

In a media release, Equality Ohio, the only statewide LGBT-rights advocacy organization, praised the Courts DOMA decision while stressing that Ohio’s own constitutional ban against same-sex unions remains in effect.

“DOMA has been struck down. The Supreme Court affirmed that the federal government cannot discriminate against committed couples of the same sex. Same-sex couples in Ohio legally married in other jurisdictions should now be eligible for more than 1000 federal benefits and programs. The State of Ohio will not be compelled to recognize marriages performed in other jurisdictions.”

Elyzabeth Holford, Executive Director of Equality Ohio, outlined what affect the ruling will have in Ohio, citing the need for marriage equality advocates to stay engaged.

“We are celebrating today. For same-sex couples legally married and living in Ohio, this is a real game changer. For the first time they can file their federal taxes jointly – of course, they’ll have to file their state taxes individually,” Holford said. “This is a huge step in the right direction. It is recognition of loving, partnered families. It allows for the dignity of recognized relationships. We’ve still got work to do for full equality here in Ohio, but today we joyously celebrate”

“We are excited for California LGBTQ couples whose right to marry has been restored. We know we have much work to do in Ohio to achieve full equality but today we are celebrating the decisions that promote the recognition and dignity of our relationships and our families," Wolford said.

"While we are disappointed in the Supreme Court's decision to strike down part of the federal Defense of Marriage Act, the court today did not impose the sweeping nationwide redefinition of natural marriage that was sought,” Perkins said, "We are disturbed that the court refused to acknowledge that the proponents of Proposition 8 have standing to defend Proposition 8. This distorts the balance of powers between the legislative, executive, and judicial branches of government.”
Posted by M. O'Brien at 1:42 PM